#MissionMonday: “My past is finally resting where it belongs … in the past!”

Nakia “physically felt the chains falling off” when she was approved to have her record cleared through Goodwill’s expungement services. 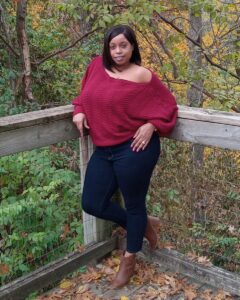 Nakia became pregnant with her first child at age 15. She welcomed a baby girl who suffered medical issues for three years before being diagnosed with Sickle Cell Anemia.

Soon after giving birth to her second child in 1996, she became a single mother of two daughters and was unable to pursue secondary education. Nakia describes herself as becoming “lost, rebellious and angry,” which led to her making mistakes that would follow her through adulthood.

After being charged with a felony, Nakia struggled to find employment.

“I was being told that I don’t qualify for jobs that I was actually over-qualified for,” Nakia said. “You honestly start to feel like you are undeserving of a second chance. When I received news [from Goodwill] that all my charges were approved for expungement, I literally cried. At that moment, I physically felt the chains falling off.”

Nakia says cleaning up her record was the best thing she could have done for her life – that for 20 years, she was just as good as her records stated.

“No one knew I was really intelligent. I wasn’t given the opportunity to show I was a self-starter and team player. No one cared that I was an over-achiever, who would stop at nothing to reach her goal.”

Nakia encourages individuals who have background barriers to take advantage of the types of services Goodwill offers. Thanks to Goodwill and Legal Aid, she was able to have six charges expunged from her record, free of charge.

“My past is officially clean,” Nakia exclaimed. “My past is finally resting where it belongs … in the past! I will be forever thankful for this blessing.”

She said, “This is the job I received after my internship, and I’m still employed here. I truly started at the bottom, now eight years later, I’m working as an account representative. Look at God! It’s the longest I have ever been employed.”